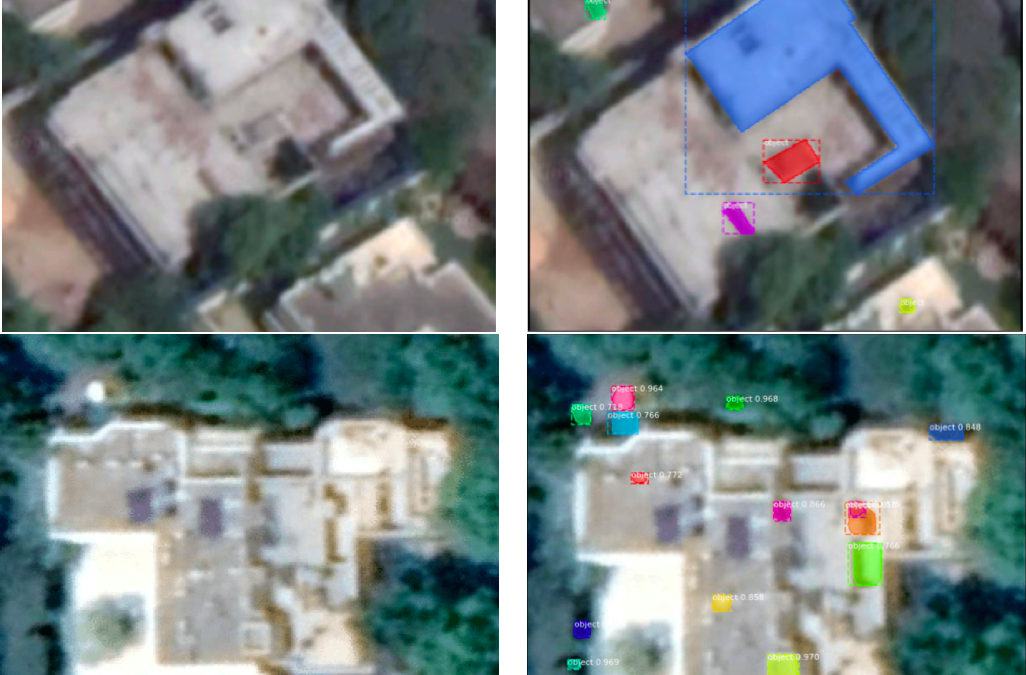 Mask R-CNN was built by the Facebook AI research team. The working principle of Mask R-CNN is quite simple. The researchers combined two previously existing models together and played around with the linear algebra. The model can be divided into two parts — a region proposal network (RPN) and a binary mask classifier. Step one is to get a set of bounding boxes that possibly contain an object of relevance. The second stage is to color the boxes.

Our goal of using this model is to segment or separate each roof-top instance in an image.

Our challenges started with the lack of data as there are no datasets with rooftops.

We used weights from Mask R-CNN network trained over “coco” dataset that was originally trained to recognize 80 classes but did not have a roof, as a starting point for our model. Resnet 101 was used as a backbone architecture. We started with training our model for “heads” layers, i.e. the RPN, classifier and mask heads of the network; because training the entire network would need a lot of data and since it was pre-trained model over many different classes, it would be a good start. Then to see the difference it made in prediction, we moved up to training till stage 4 and 5 of Resnet 101 architecture.

We compared results from another 20 rooftops and our results show that often the model 4 performs best.

We then tried changing the minimum detection confidence threshold, from 0.9 to 0.7. Regions of Interest(ROIs) below this value will be skipped. It was done because for detecting roofs, 0.9 seemed a very high threshold when it can just be reduced enough to predict any region as a rooftop, as roofs aren’t intricate, well-defined and very specific regions; so any region that can be a good candidate for rooftop should be considered. At 0.7 we had a lot more regions but it also presented us with many overlapped regions as roofs whereas, for 0.9 value, we had a few big blobs taking all of the adjacent roofs as one region.

Other than this, we were trying to train the model by changing the optimizer from Stochastic Gradient Descent(SGD) to Adam optimizer.

2. SGD trained models predict sharper masks than the Adam trained models. This shows SGD is better for our models, and we’ll continue with it.

1. Training the model with 70% confidence is increasing the number of masks, as it has been trained to consider low probability roofs too which leads to overlapped masks. Whereas training with 90% is giving cleaner and fewer masks. So, training with 90% seems a better option.

2. Now, to predict masks with 70% confidence or with 90% confidence? 90% is too precise and might remove other options whereas 70% will include them as seen in images 4 and 7. So, after training for more number of images(currently trained over 95 images), we will be able to see which one can be used finally.

As a final step to identify the individual rooftops we did some post-processing. We created regular shapes from the odd colored shaped. The post-processing was done on a dataset of 607 images.