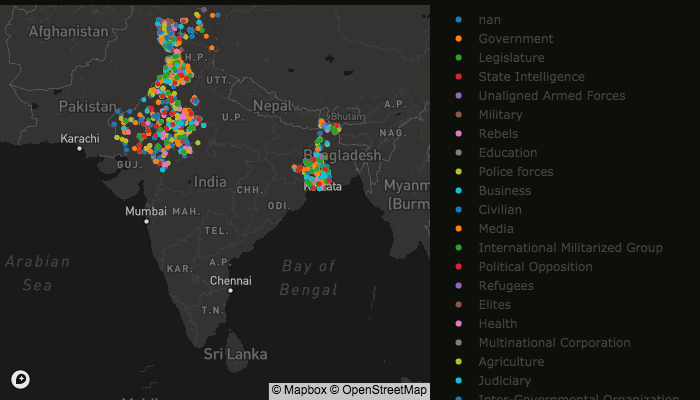 This project aimed to provide a proof-of-concept machine-learning-based methodology to identify land conflicts events in geography and match those events to relevant government policies. The overall objective is to offer a platform where policymakers can be made aware of land conflicts as they unfold and identify existing policies that are relevant to the resolution of those conflicts.

The geographic scope of the project was limited to India, which has the most environmental (land) conflicts of all countries on Earth.

Degraded land is “land that has lost some degree of its productivity due to human-caused process”, according to the World Resources Institute. Land degradation affects 3.2 billion people and costs the global economy about 10 percent of the gross product each year. While dozens of countries have committed to restore 350 million hectares of degraded land, land disputes are a major barrier to effective implementation. Without streamlined access to land use rights, landowners are not able to implement sustainable land-use practices. In India, where 21 million hectares of land have been committed to the restoration, land conflicts affect more than 3 million people each year.

AI and machine learning offer tremendous potential to not only identify land-use conflicts events but also match suitable policies for their resolution.

All data used in this project is in the public domain.

News Article Corpus: Contained 65,000 candidate news articles from Indian and international newspapers from the years 2008, 2017, and 2018. The articles were obtained from the Global Database of Events Language and Tone Project (GDELT), “a platform that monitors the world’s news media from nearly every corner of every country in print, broadcast, and web formats, in over 100 languages.” All the text was either originally in English or translated to English by GDELT.

In this phase, the articles of the News Article Corpus and policy documents of the Policy Database were prepared for the natural language processing models.

The articles and policy documents were processed using SpaCy, an open-source library for natural language processing, to achieve the following:

Coreference resolution was applied to the processed text data using Neuralcoref, which is based on an underlying neural net scoring model. With coreference resolution, all common expressions that refer to the same entity were located within the text. All pronominal words in the text, such as her, she, he, his, them, their, and us, were replaced with the nouns to which they referred.

For example, consider this sample text:

“Farmers were caught in a flood. They were tending to their field when a dam burst and swept them away.”

Neuralcoref recognizes “Farmers”, “they”, “their” and “them” as referring to the same entity. The processed sentence becomes:

“Farmers were caught in a flood. Farmers were tending to their field when a dam burst and swept farmers away.”

After preparation of the articles in the News Article Corpus, as described in the previous section, the texts were then prepared for classification.

First, an Annotated Corpus was formed to train the classification model. A 1,600 article subset of the News Article Corpus was manually labeled as “Negative” or “Positive”.

To prepare the articles in both the News Article Corpus and Annotated Corpus for classification, the previously pre-processed text data of the articles was represented as vectors using the Bag of Words approach. With this approach, the text is represented as a collection, or “bag”, of the words it contains along with the frequency with which each word appears. The order of words is ignored.

For example, consider a text article comprised of these two sentences:

Sentence 1: “Zahra is sick with a fever.”

Sentence 2: “Arun is happy he is not sick with a fever.”

This text contains a total of ten words: “Zahra”, “is”, “sick”, “happy”, “with”, “a”, “fever”, “not”, “Arun”, “he”. Each sentence in the text is represented as a vector, where each index in the vector indicates the frequency that one particular word appears in that sentence, as illustrated below.

With this technique, each sentence is represented by a vector, as follows:

“Zahra is sick with a fever.”

“Arun is happy he is not sick with a fever.”

With the Annotated Corpus vectorized with this technique, the data was used to train a logistic regression classifier model. The trained model was then used with the vectorized data of the News Article Corpus, to classify each article into Positive and Negative conflict categories.

The accuracy of the classification model was measured by looking at the percentage of the following:

The trained logistic regression model successfully classified the news articles with precision, recall, and f1-score of 98% or greater. This indicates that produced a low number of false positives and false negatives.

A word cloud of the articles in the Gold Standard Corpus gives a sense of the content covered in the articles.

A topic model was built to discover the set of conflict topics that occur in the Positive conflict articles. We chose a semi-supervised approach to topic modeling to maximize the accuracy of the classification process. We chose to use CorEx (Correlation Explanation), a semi-supervised topic model that allows domain knowledge, as specified by relevant keywords acting as “anchors”, to guide the topic analysis.

To align with the Land Conflicts Policies provided by WRI, seven relevant core land conflicts topics were specified. For each topic, correlated keywords were specified as “anchors” for the topic.

The trained topic model provided 3 words for each of the seven topics:

The resulting topic model is 93% accurate. This scatter plot uses word representations to provide a visualization of the model’s classification of the Gold Standard Corpus and hand-labeled positive conflict articles.

The objective of this phase was to build a model to identify the actors, actions, scale, locations, and dates in each positive conflict article.

Typically, names, places, and famous landmarks are identified through Named Entity Recognition (NER). Recognition of such standard entities is built-in with SpaCy’s NER package, by which our model detected the locations and dates in the positive conflict articles. The specialized content of the news articles required further training with “custom entities” — those particular to this context of land conlficts.

All the positive conflict articles in the Annotated Corpus were manually labeled for “custom entities”:

This example shows how this labeling looks for some text in one article:

These labeled positive conflict articles were used to train our custom entity recognizer model. That model was then used to find and label the custom entities in the news articles in the News Article Corpus.

The objective of this phase was to build a model to match each processed positive conflict article to any relevant policies.

The Policy Database was composed of 19 policy documents relevant to land conflicts in India, including policies such as the “Land Acquisition Act of 2013”, the “Indian Forest Act of 1927”, and the “Protection of Plant Varieties and Farmers’ Rights Act of 2001”.

A text similarity model was built to compare two text documents and determine how close they are in terms of context or meaning. The model made use of the “Cosine similarity” metric to measure the similarity of two documents irrespective of their size.

Cosine similarity calculates similarity by measuring the cosine of an angle between two vectors. Using the vectorized text of the articles and the policy documents that had been generated in the previous phases as described above, the model generated a collection of matches between articles and policies.

The objective of this phase was to build a web-based tool for the visualization of the conflict event and policy matches.

An application was created using the Plotly Python Open Source Graphing Library. The web-based tool houses the models and allows users to explore land conflict events spatially and through time, as well as explore all land conflict events by category across geography and time.

The map displays land conflict events detected in the News Article Corpus for the selected years and regions of India.

Conflict events are displayed as color-coded dots on a map. The colors correspond to specific conflict categories, such as “Agriculture” and “ Environmental”, and actors, such as “Government”, “Rebels”, and “Civilian”.

In this example, the tool displays geo-located land conflict events across five regions of India in 2017 and 2018.

By selecting a particular category from the right column, only those conflicts related to that category are displayed on the map. Here only the Agriculture-related subset of the events shown in the previous example is displayed.

News articles from the select years and regions are displayed below the map. When a particular article is selected, the location of the event is shown on the map. The text of the article is displayed along with policies matched to the event by the underlying models, as seen in the example below of a 2018 agriculture-related conflict in the Andhra Pradesh region.

Here is a closer look at the article and matched policies in the example above.

This overview describes the results of a pilot project to use natural language processing techniques to identify land conflict events described in news articles and match them to relevant government policies. The project demonstrated that NLP techniques can be successfully deployed to meet this objective.

Potential improvements include refinement of the models and further development of the visualization tool. Opportunities to scale the project include building the library of news articles with those published from additional years and sources, adding to the database of policies, and expanding the geographic focus beyond India.

Opportunities to improve and scale the pilot project

This project was done in collaboration with Kathleen Buckingham and John Brandt, our partners with the World Resources Institute (WRI).

Omdena is an innovation platform for building AI solutions to real-world problems through global bottom-up collaboration. Omdena is a partner of the United Nations AI for Good Global Summit 2020.