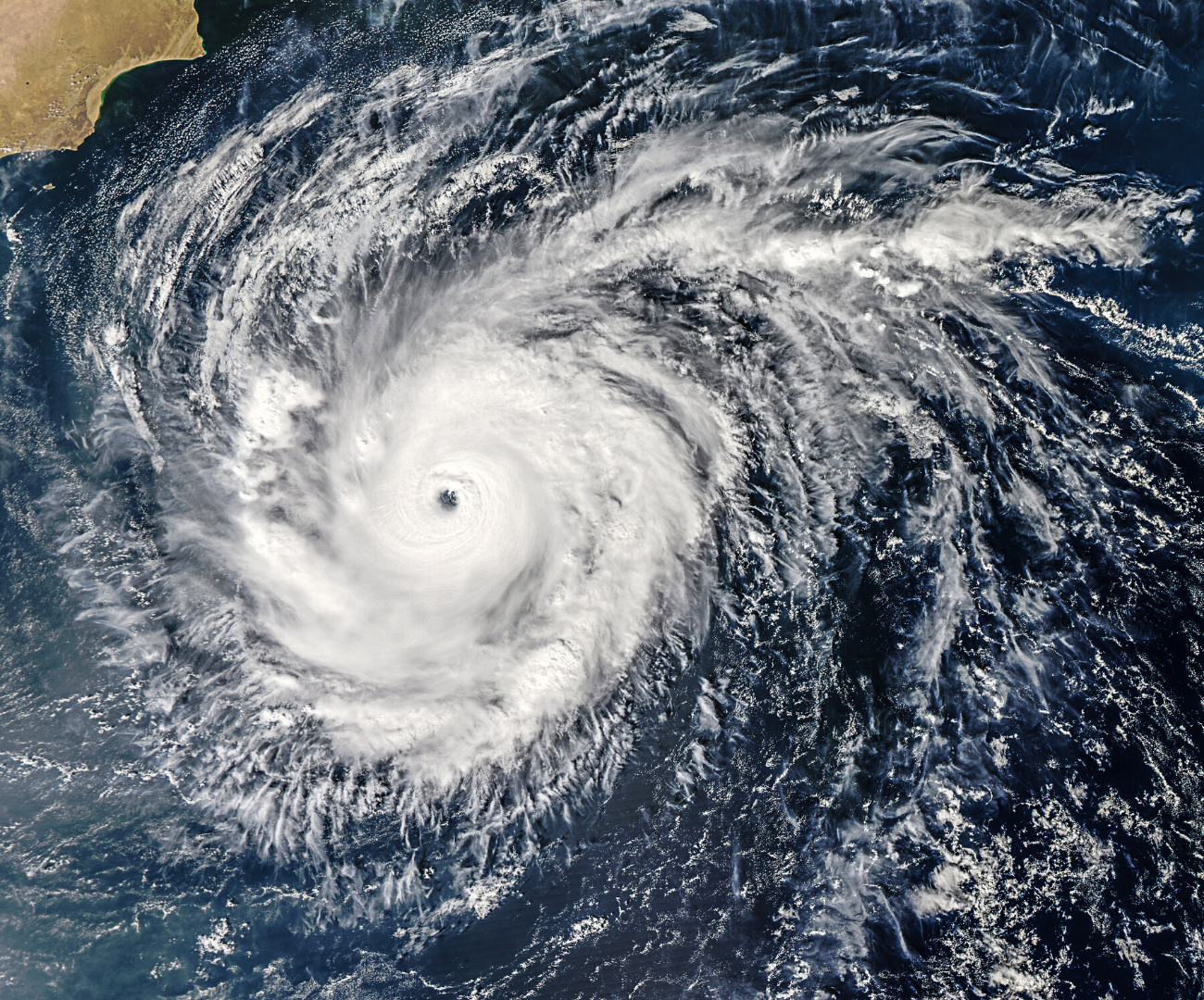 AI technology can be applied for disaster response and to predict the number and type of food and non-food items during a cyclone strike. The applications can be applied to other disaster types.

On May 20, 2020, Cyclone Amphan struck the eastern Indian city of Kolkata and killed at least 84 people across India and Bangladesh. It lashed coastal areas with ferocious wind and rain. Thousands of trees were uprooted in the gales; electricity

and telephone lines were brought down and houses were flattened. Many of Kolkata’s roads were flooded and its 14 million people were left without power.

The United Nations World Food Programme (WFP) is the world’s largest humanitarian organization addressing hunger and promoting food security. WFP is usually one of the first humanitarian agencies to arrive and provide support to the locals when a disaster such as Cyclone Amphan takes place. The below infographic depicts its analysis of Cyclone Amphan’s effects. 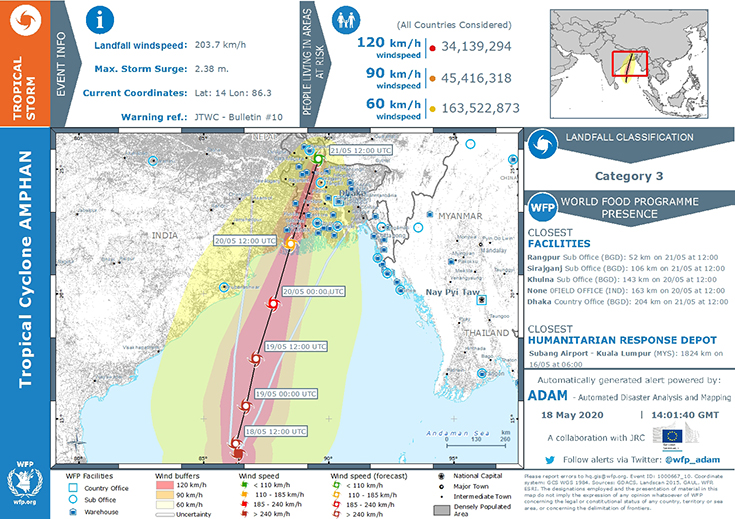 On a daily basis, WFP has about 5,600 trucks, 30 ships, and nearly 100 planes on the move, delivering food and other assistance to those in most need whenever an emergency occurs.

The question is how many resources to mobilize for a specific disaster? One of the most challenging tasks is to predict how many food and non-food items – such as blankets, hygiene items, and tools – are needed. According to the Needs Assessment Working Group (NAWG) in Bangladesh, more than 14.2 million people were in the path of the cyclone Amphan, of which 7.2 million were women and 1.4 million children.

While this information was helpful, it did not specifically inform about how many of the exposed people would actually be affected. This was a complex problem: there are many factors other than cyclone-specific properties that determine how many exposed people will end up affected and will need emergency food and non-food supplies. A poor estimation might lead to food shortages and humanitarian crises in the affected area. Whereas an overestimation could lead to a waste of resources that could be used for support in other locations.

In March 2020, Omdena launched a project (hosted by the WFP Innovation Accelerator) that united 34 Data Science collaborators and changemakers across four continents. All team members worked together for two months on Omdena´s innovation platform to build AI solutions to improve disaster response, by estimating affected populations and the associated relief packages for forthcoming cyclone emergencies.

The AI challenge was broken down into the following phases:

The collaborators from Omdena, along with the WFP team, discussed the problem in order to understand its socio-economic impact. Following the bottom-up approach of Omdena challenges, the project was entirely virtual without a single leader. Instead, various approaches and ideas were discussed and within the first week, task groups were created with task managers responsible to ensure progress.

Data collection was the longest and most difficult task, occupying 75 percent of the project. This brought to light the real issue that technology faces today: a lack of open-source data, as well as data in a suitable format for the use of AI models. Bearing these limitations in mind, the project focused on acquiring data related to cyclone emergencies from publicly available sources, including:

Python scripts were written to perform data analysis, data aggregation, and web scraping to fill in any missing values – along with some manual work to gather data that was difficult to automate (eg old PDF documents with scanned pictures).

This provided two files as outputs, the first being a cyclone data file with over 1,000 events and about 45 features that characterize the cyclone events, along with the target field to be predicted by the AI models (affected population). The second output was a food and non-food items file, which was later used to develop a mathematical model for final estimation of the number of relief commodities, given an affected population (from Phase i).

Once the data was ready, the next task focused on finding features that have the most impact on the AI models that have been developed. The team used several machine learning (ML) methods, such as clustering and random forest, to build the final list of relevant features for the problem. Some of these were:

These results are summarised in Figure 3 below. 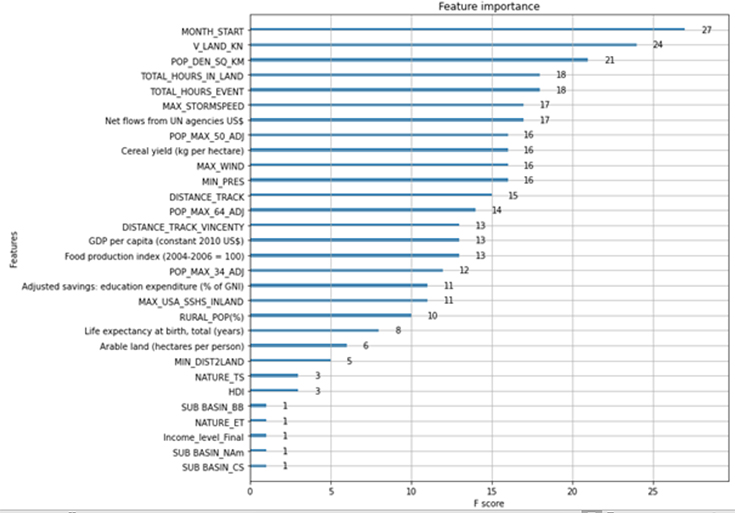 The core aim of the AI model was to predict the number of food and non-food items needed when a new cyclone or disaster strikes. From a technical perspective, the teams split the problem into two parts. First, using machine learning regression techniques based on the most relevant features, the model predicted the affected population. The second part was to use the affected population number as the basis for estimating food and non-food items in a linear fashion, following the WFP guidelines.

The team trialed the following ML regression approaches for the first part:

The performance metrics showed that the models perform better when estimating a smaller affected population, equivalent to about 150,000 people, which is compatible with the affected population of tropical storms. Such results stem from the fact that this analysis had a majority of tropical storms in the data set, which are the most common kinds of cyclone events. Efforts in improving the performance of models for a better description of higher damage events include collecting more data for such extreme events.

The team used the StreamLit open-source application framework to build a user-centric application, based on its AI model, which determines the relief package when given a cyclone emergency. The application receives cyclone-specific data from the user to generate an estimation of food and non-food items necessary for the emergency. The application goes a step further into refining the model, once correct information (ie the affected population) has been fed into the model. The output of StreamLit is fed into a Python GUI application, built on top of a mathematical model, to estimate the quantity of relief for food and non-food items.

A demonstration of the relief package tool can be found here.

The documentation of the model ensures that it can be enhanced and deployed for the betterment of society. The developers also hope that AI can be deployed more on social and humanitarian initiatives such as these.

Whenever a disaster takes place, humanitarian agencies need to act fast in order to provide support to the affected populations. In such emergencies, the right information to the right person or organization is crucial to saving lives. The tool developed in this work has unfolded the potential of data-driven decision-making for humanitarian response, particularly by showing how AI can make disaster relief operations more efficient. This project focused on cyclones in particular, but a similar approach could be applied to many other natural disasters, such as earthquakes, tsunamis, and floods.

Natural disasters have a high degree of unpredictability, which is one of the reasons they are so deadly. Let’s say a cyclone is spotted at Madagascar, one of the most cyclone-prone countries in Africa, and also one of the countries provided with WFP assistance. Cyclones are tracked via satellite images and their paths are also forecasted by several institutions that provide open-source information.

By using the tool developed in this project, humanitarian agents from organizations such as WFP would only need to add the cyclone tracking information, such as wind speeds and pressure, as an input to the tool, alongside the number of days to be covered. The model would then cross this information with socio-economic data about Madagascar, including demographic information, such as the number of children and pregnant women, providing the most suitable relief package for this specific location.

The relief package includes both food and non-food items (NFI) to be delivered, estimated using WHO guidelines for nutrition, and obtained from a sophisticated model for the determination of affected populations using AI techniques. The use of the application would take a matter of minutes, having the potential of improving the efficiency of logistics and deployment phases of the operations. Moreover, since this relief package design is modeled based on data from previous cyclones, further updating the model with new data can improve the accuracy for future disaster management operations.