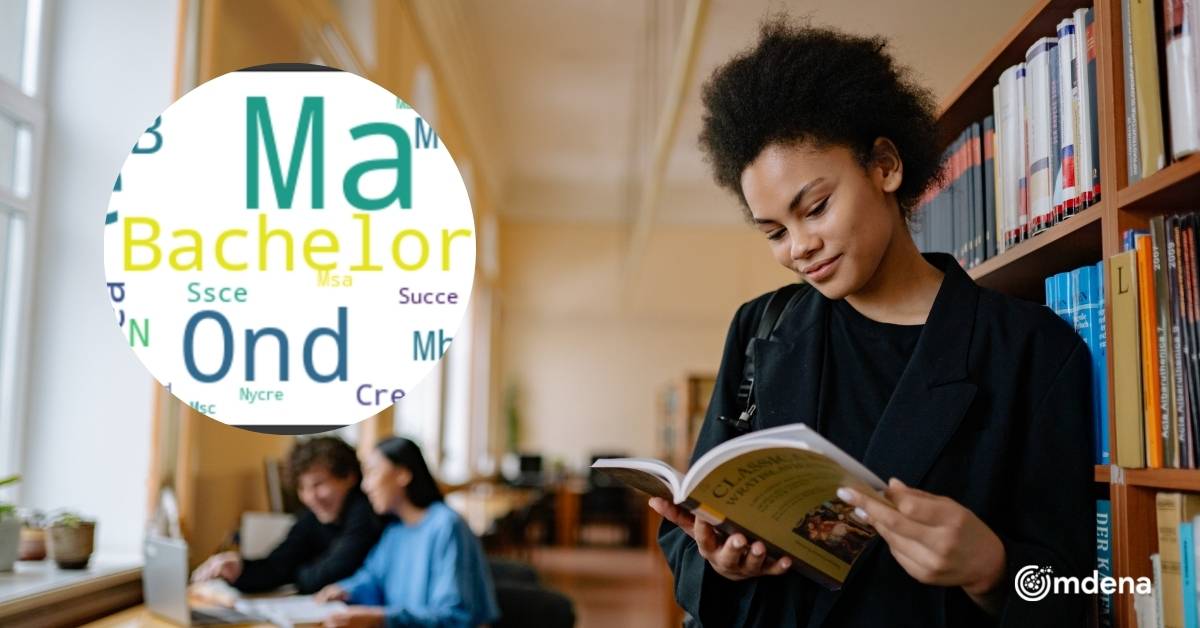 Unemployment is an important factor that impacts individuals and the nation’s economy, regions, and communities. During the pandemic year, the unemployment rate in Nigeria increased to 33.30 percent in the fourth quarter of 2020 from 27.10 percent in the second quarter of 2020, while the underemployed rate is 28.7% giving a total percentage rate 61.9% of  Nigerians that are unemployed or underemployed.

The first step in the project was to gather relevant data to create a machine learning model and recommend appropriate job skills for the unemployed. Below are the steps and process of data gathering, also known as data collection.

To collect the data, we first validate what type of data we need for the problem statement. Based on finding employment information, we need to look at employment data on job listing pages and graduate student lists to get such data. Table 1.0 shows pages that list the data.

We selected LinkedIn as the job-finding website to get the list of available jobs in Nigeria to create the database. We scraped the job title information using BeautifulSoup and requests which are libraries in Python.

The technique of extraction from Linkedin was to:

1. Filter for jobs for Nigerians on LinkedIn.

2. Collect the unique urls of the jobs.

3. Loops through these unique jobs URL and collect the entire content on the jobs page.

5. Convert dates in words to actual dates: “3 days ago” and “x weeks ago” to DD/MM/YYYY format.

6. Collate these data to a Dataframe

NB: these extraction processes have been automated into a python script with logging for future use. In addition the graduate profile dataset was developed by converting the members’ CV to text file.

We scraped the data based on the following categories, as shown in Figure1.0. 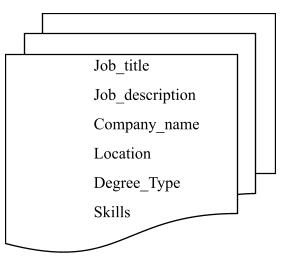 The data collected is unstructured data. So, the next stage we will be proceed to data processing.

Data preprocessing plays an important role in your workflow. You need to transform the data in a way that the computer would understand and be able to work with it.

Data preprocessing involves manipulating or dropping data before it is used to ensure or enhance performance. It is unarguably one of the most vital tasks to carry out while building a machine learning model as the dataset should be cleaned and wrangled enough to release it of irrelevancies and redundancies, thereby reducing the noise, which will increase the model’s output after all necessary machine learning techniques is undergone.

The derived output from the previous data gathering process is unstructured and needs a lot of cleaning and wrangling, performed in a step-by-step process. The raw data collected was filtered, sorted, processed, analyzed, stored, and then presented in a readable format by checking for errors, duplication, miscalculations, or missing data.

The first raw dataset gathered was a list of jobs available in Nigeria, scraped from LinkedIn here and a preview in Fig 2.0 below. 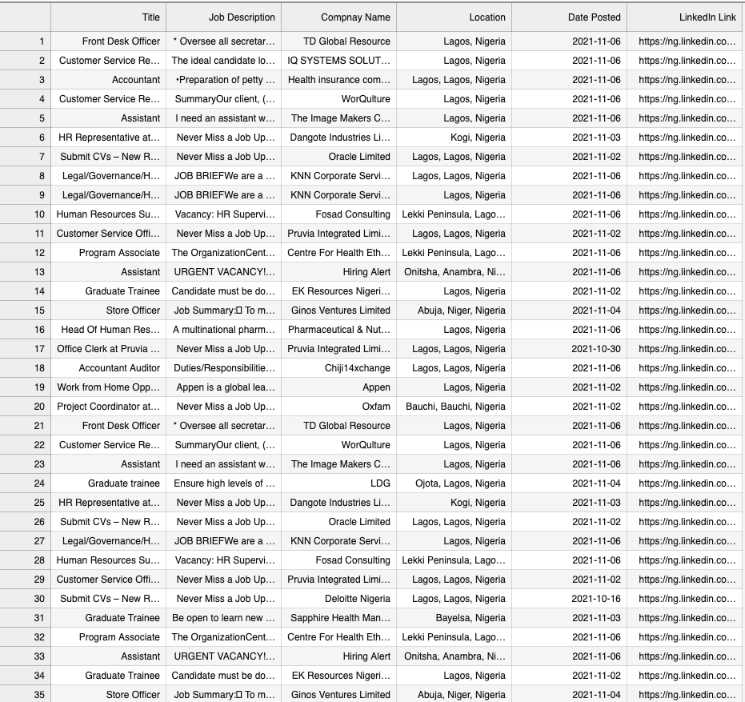 Scanning through this dataset, you can notice many irrelevancies and noise that need deletion. We started by dropping unnecessary columns (‘Date posted’ and ‘LinkedIn link’), then inspected the rest of the datasets by; checking for null values, renaming, and replacing misspelled words, sentences, and characters.

The ‘Location’ column needed a little bit of work, and it was cleaned and left with specific states in which the available jobs are. A new column was required to be named ‘Degree Type,’ which consisted of the particular types of degree an applicant can hold for a specific job. To achieve this, we had to list possible degree types in Nigeria to extract them from the ‘Job Description’ column, which had all the necessary information regarding each job. The ‘findall’ method came in handy and had the job done, displayed below in Fig1.1. 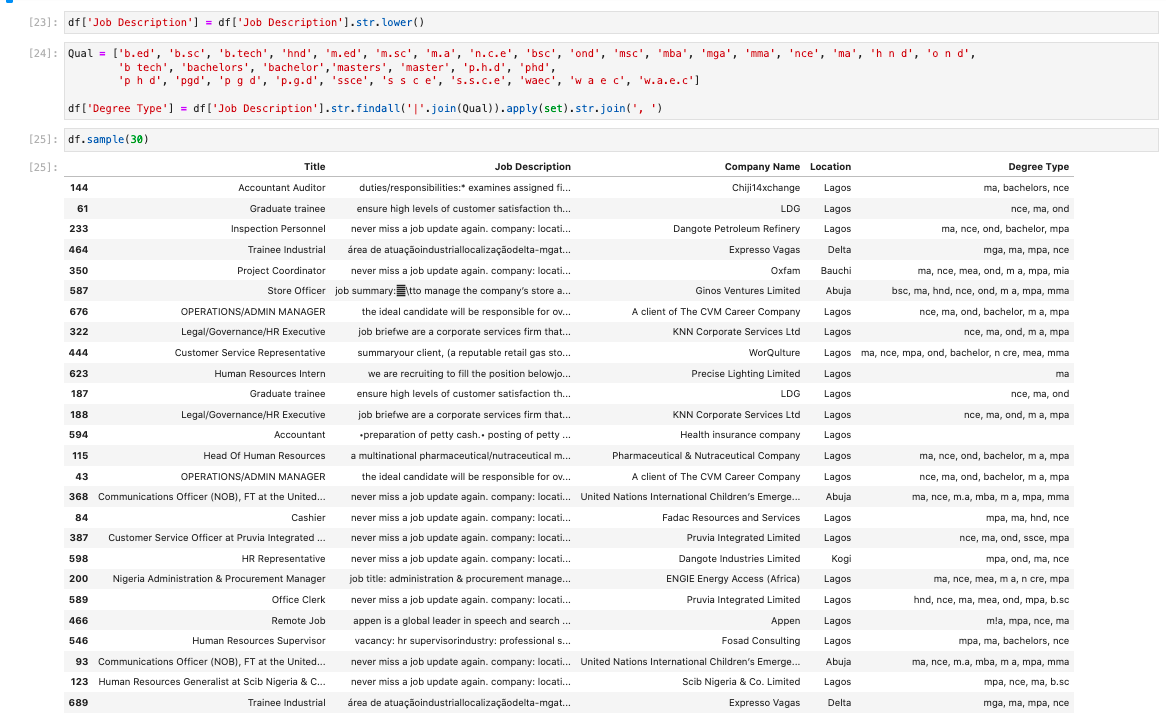 Fig 3.0 Snippet of the preprocessed data after extraction.

The next process involved adding a new column, ‘Skills’, which is specific to a job type because the recommender system matches available jobs and required skills an applicant has to possess to get qualified for the job. We manually set up a new dataset after team members did various research to find skills required to prepare for each career with a preview below in Fig 4.0. 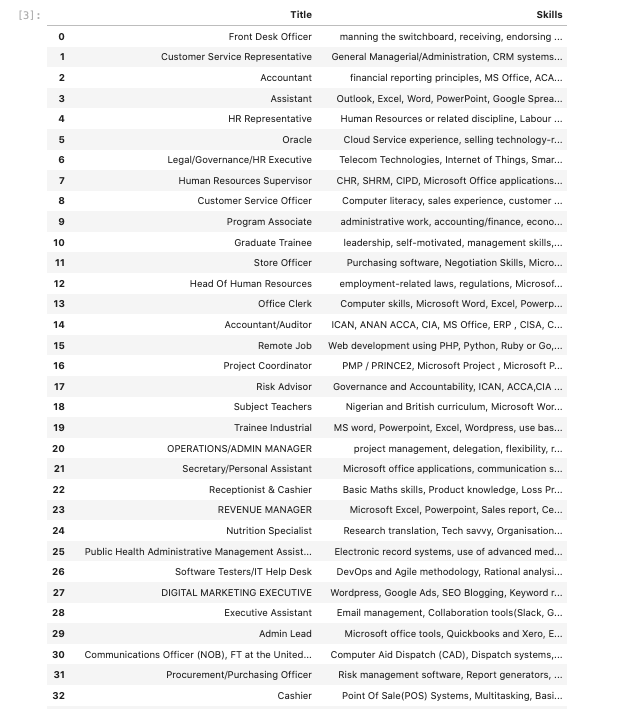 Fig 4.0 Snippet of skills extracted from the raw data

The manually developed dataset had to be merged with the existing dataset by calling on the merge method, which automatically fixed it in a skill column, and our project was halfway complete. The preview of the merged dataset is found below in Fig 5.0.

Having completed the cleaning and wrangling process, we had to convert the dataset to values the computer understands and can work with. This was a Natural Language Processing problem. This process was accomplished with the Term Frequency – Inverse Document Frequency vectorizer (TFIDF vectorizer), which is based on a bag of words and contains insights about the less relevant and more relevant words in our dataset.

Term Frequency (TF) is the measure of the frequency of a word(w) in document(d). It is the ratio of a word occurrence in a document to the total number of words in the document

Inverse Document Frequency measures the importance of a word and it provides more weightage to each word based on its frequency in the corpus(D). It is defined as:

The corpus, in this sense, was the whole dataset combined in a single row named combined_corpus’. Common words (such as ‘the’, ‘is’, ‘are’)  had to be removed to increase our model’s performance using the inbuilt nltk stopwords library. A few irrelevant stopwords in the dataset were appended manually.

After initializing the fit-transform TFIDF, each word in the combined_corpus was represented with a number within 0-1. An array shown in figure 6.0 below was obtained, which gave us the output to proceed to build the Nearest Neighbour Algorithm and the Cosine Similarity Algorithm.

We created a word cloud visual on Location of job listings which gave us an intuition of what states in Nigeria had more job postings/openings as shown in figure . As expected, Lagos state has the highest count, signifying that the state had more job openings and offers in the country. 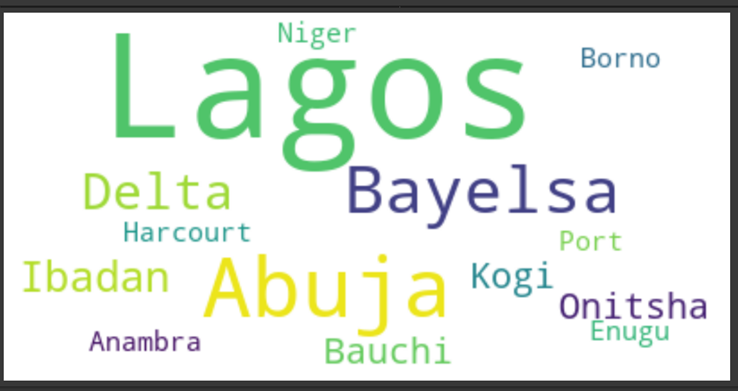 In Fig 8, We also discovered that in terms of skills (both hard and soft skills), Management skills and Communication skills were top priority for the hard skills. As for the soft skills, Microsoft Office and Analytics tools were of great importance. 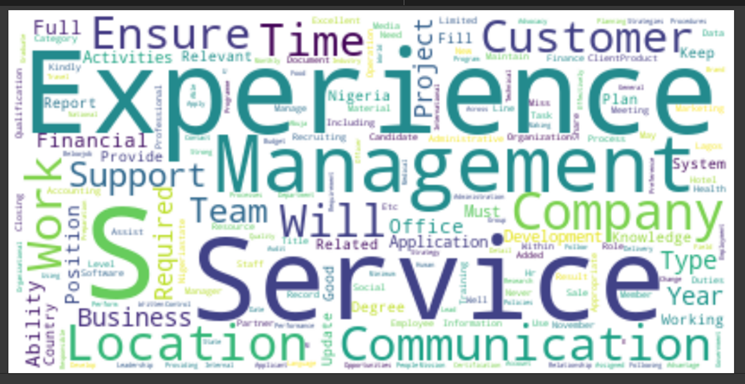 In figure 9 We focused on the type of degree that was necessary for job qualification. We discovered that tertiary education was of great importance in terms of the level of education qualification for jobs. 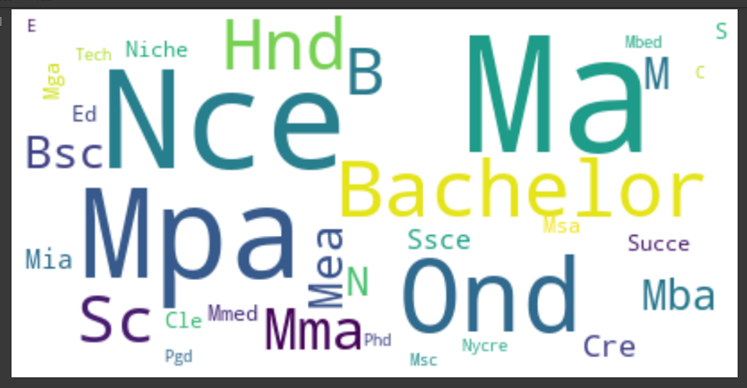 The aim for this step is to:

There are three major techniques used for building recommendation systems.

Our approach makes use of the content-based filtering as we only had access to public job posting datasets on different sites. After feature encoding using TfidfVectorizer, we built two algorithms K-Nearest Neighbors and Cosine similarity Algorithm. 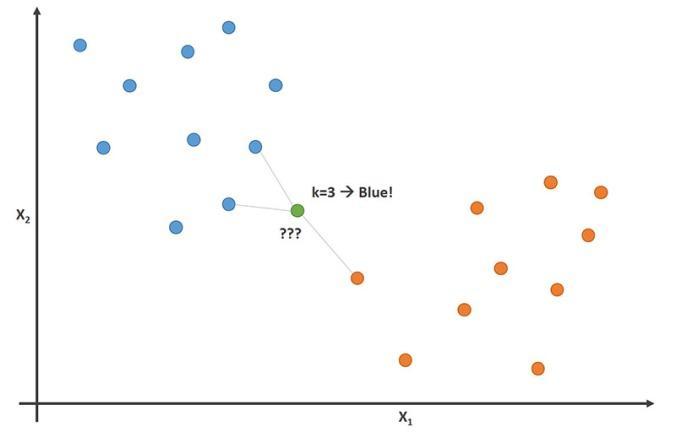 Fig 10.0 Visual representation of the distance based algorithm

We are using the nearest neighbor to test the efficiency of our model using CV dataset (Curriculum Vitae) as our testing dataset. The nearest neighbor was programmed to loop through each vectorized job posting and return the Euclidean distance between each job vector and the vectorized test user CV alongside the index of the job postings to track which job returned the shortest distance.

The formula for the Euclidean distance:

It is important to note that the nearest neighbors’ k value was set to 5, signifying we only needed the top 5 most similar jobs to a user with respect to their skills and contents on their curriculum vitae.

Fig 11.0 shows screenshot of the function that uses nearest neighbors to return the shortest distance between a test user and the vectorized job postings in the job listings dataset. 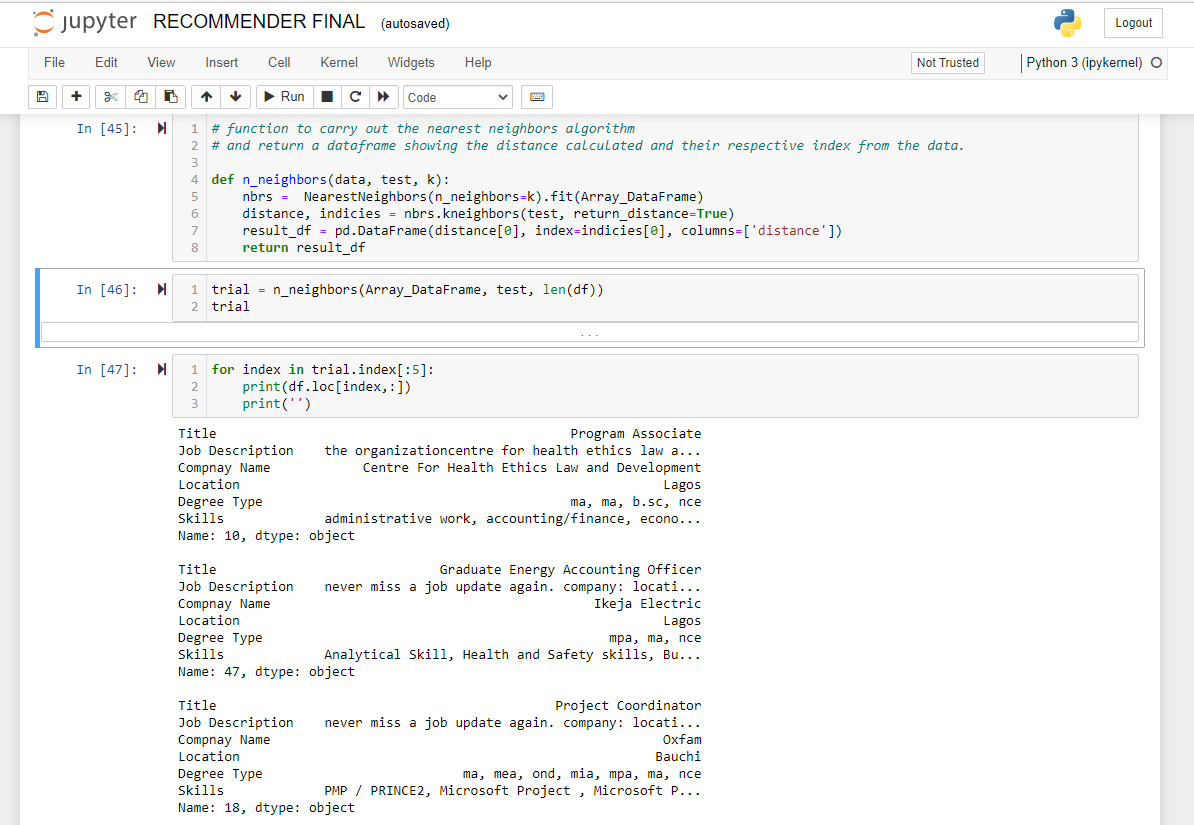 Fig 12.0 The Angular Distance between the test and the training data