A complete pipeline to identify and monitor human rights abuses through NLP models. In this two-month challenge, a group of collaborators with Human Rights First prepared annotated social media posts datasets, solved related classification problems, and built a dashboard Streamlit app deployed on cloud AWS to identify, visualize and summarize the human rights abuses happening related to war crime based on the severity score and location. 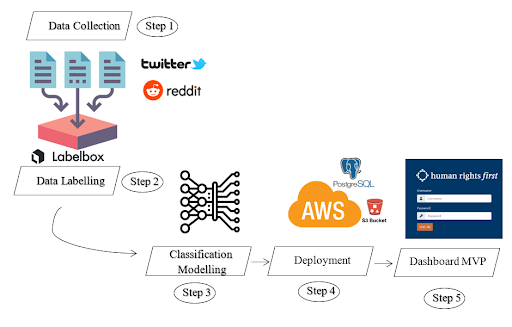 We collected datasets using API and scraping text data from different social media platforms: Twitter and Reddit. These datasets would ideally be used to tackle many diverse problems related to human rights abuses, for example, war crime detection and war crime ranking based on the severity score on subcategories of war crimes.

In order to make the process of data extraction easier by identifying the keywords for extraction, a set of vocabulary is developed. Figure 2 shows the keywords (adjective, verb, etc.) are scraped from the United Nations website using BeautifulSoup method. To widen the vocabulary, a pre-trained NLP model (glove) is used to find the vocabulary with similar words or synonyms of the keywords and save it into CSV format.

Methods used for data collection from Reddit social media platforms are shown in Figure 3. The first method is using Pushshift API to perform the data extraction. The advantage of this API is it can extract more than 1,000 thread/post text data, however, it requires a greater time of about 1-2 hours to complete. Therefore, another API method is used which is PRAW API. The limitation of this method is it only limits 1000 threads/posts. The advantage is it only takes 2-3 minutes for extraction. The credentials provided by HRF such as app name, id and secret key are used to collect the Reddit data. The data is extracted from 5 different pages called world news, news, war crimes, war, war crime. Next, specific keywords (for example, weapons, civilians) are used to extract data from particular war crime topics. Then the data is ready for data labeling.

Methods used for data collection from Twitter social media platforms are shown in Figure 4. The first method is the Tweepy API to perform the data extraction. The disadvantage of this API is it only allows us to get a limited number of tweets and you can’t exceed your quota which is very low. Therefore, an alternative solution is used that does not interface with the API called Twint. The Twint works more as scraping and the ultimate advantage of it is it doesn’t interact with API, hence there are practically no limitations to the data we obtain. The data is collected by setting up a few main restrictions such as the data range, the language, and the keyword used to extract the data. Then the data is ready for data labeling.

We planned a generic approach to label datasets and used it to label war crime data for Twitter and Reddit. Labeling the datasets as shown in the life cycle (Figure 1) requires an appropriate labeling tool. To this end, we explored different tools such as HumanFirst and Labelbox, etc., but eventually selected Labelbox as it provides to label subcategories.

The second step in the labeling life cycle is to prepare a set of guidelines. These guidelines are problem-specific and include the definition of the problem with examples, the exact labels to assign, etc. with the ultimate goal of achieving consistency of labels from different collaborators. The steps of labeling include multiclass and multilabel labeling as shown in Figure 5.

Here are the labels used for Reddit and Twitter data classification. We studied different sub-labels that are suitable to fall under the war crime category and the label definitions have been verified by Human Right First (host company) before we start to label.

In this section, we summarize the datasets. The outcome of the labeling distribution is shown in Figure 6. 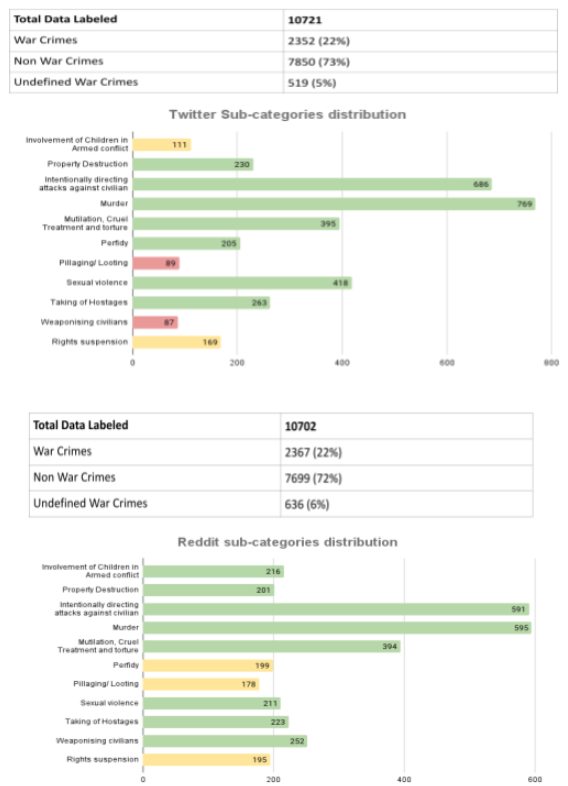 The original labeled dataset is imbalanced, therefore, we prepared two datasets from that: the original overall dataset (unbalanced) and an undersampled but more balanced dataset. We built several classification models for these two datasets separately as shown in Figure 7. 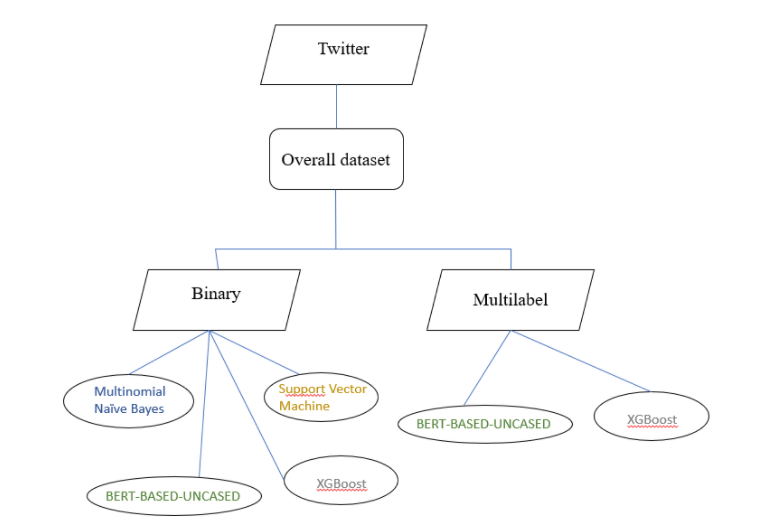 Summary of the model classification

The limitations of the models are summarized in Figure 12. Based on the models for Reddit and Twitter, for binary classification, the limitation is the models are over-fitting due to the class imbalance although it gave better accuracy. Furthermore, the war-crime examples seem to share quite similar texts, therefore lack diversity. This is another potential reason for which our models have decent performances, despite the dataset being small. The future scope for binary models is to find more efficient ways to clean the texts. The limitation for multilabel models is the models are over-fitting due to class imbalance. There were less than 100 tweets for some categories. Undersampling dropped the accuracy significantly but removed the over-fitting. The future scope for multilabel modeling is since there are 11 classes, it is very important for the classes to be balanced when doing a classification. Maybe adding some tweets manually for those imbalanced classes. In general, the limitation of modeling is it requires more training data for better accuracy, and more test data is required for a more reliable evaluation. Further fine-tuning the models for optimal performance and hyperparameter tuning of the large models require much more time and effort as each trial takes about 30 minutes. Here are future scopes for building war crime classifiers: 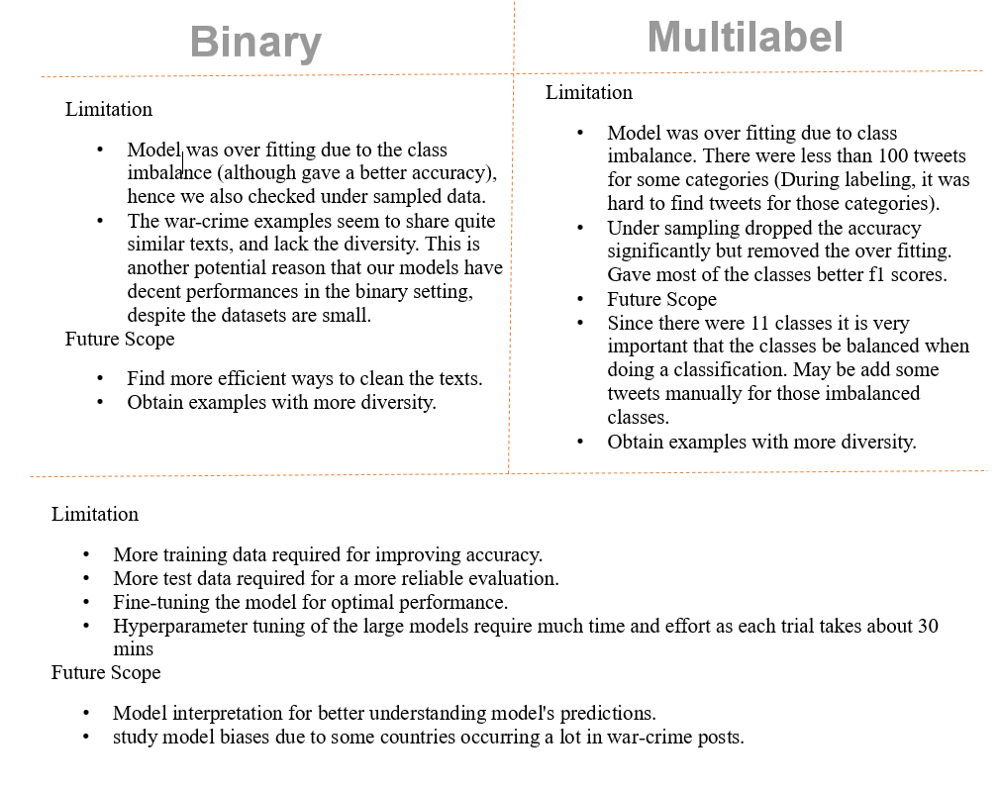 We take one step further to better understand which words (more precisely, tokens) in a text contribute to a war crime prediction from our model. For this, we use the Python library Captum, an open-source and extensible library for model interpretability built on PyTorch. Figure 13 shows a few results given by Captum on our model. We observe the following fact:

The potential reason: such words occur quite often in the positive (war crime) examples in the collected dataset, while there might not be enough negative examples with such words to help the model recognize them as neutral.

The reason for this is similar to the case of neutral words above. However, the consequence is much more severe, and we need to avoid such bias to occur. 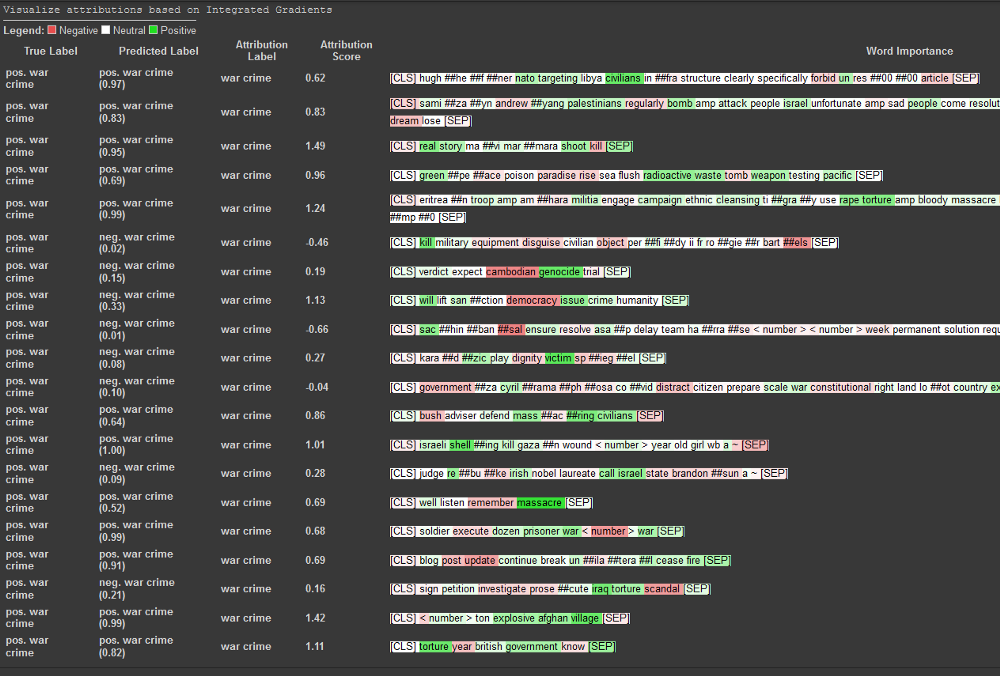 Deployment of the models

Deployment is the next crucial step after building the models. It’s at this stage that we bring the model alive to fulfill its purposes for the clients and all other stakeholders. So, we integrate the model into an environment that receives social media messages (Reddit or Twitter posts) and predicts whether it’s a war crime or nonwar crime. In the case of war crime, it also determines its subcategories such as murder, property destruction, intentionally attacking civilians, etc.

We use FastAPI to deploy the NLP models on HRF’s AWS platform. FastAPI is a modern web framework for building APIs which is fast to implement. In addition, it comes with an interactive API interface – simple to navigate and intuitive to operate with. For AWS, we use S3, PostgresQL, and EC2.

Figure 14: Steps of the deployment phase

The diagram above illustrates the first 3 steps for the deployment phase. 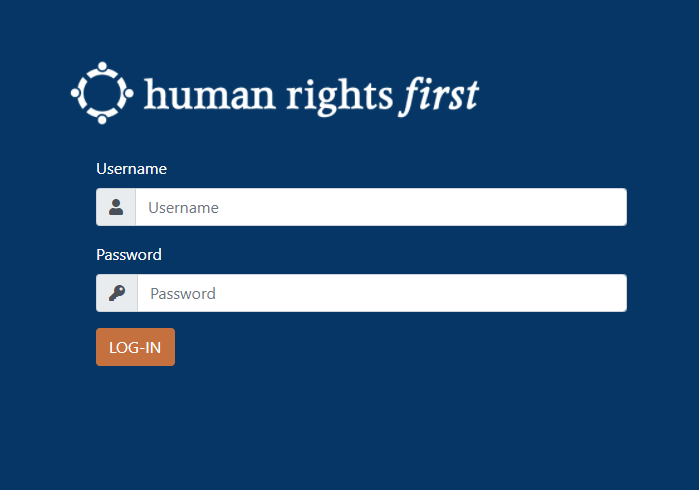 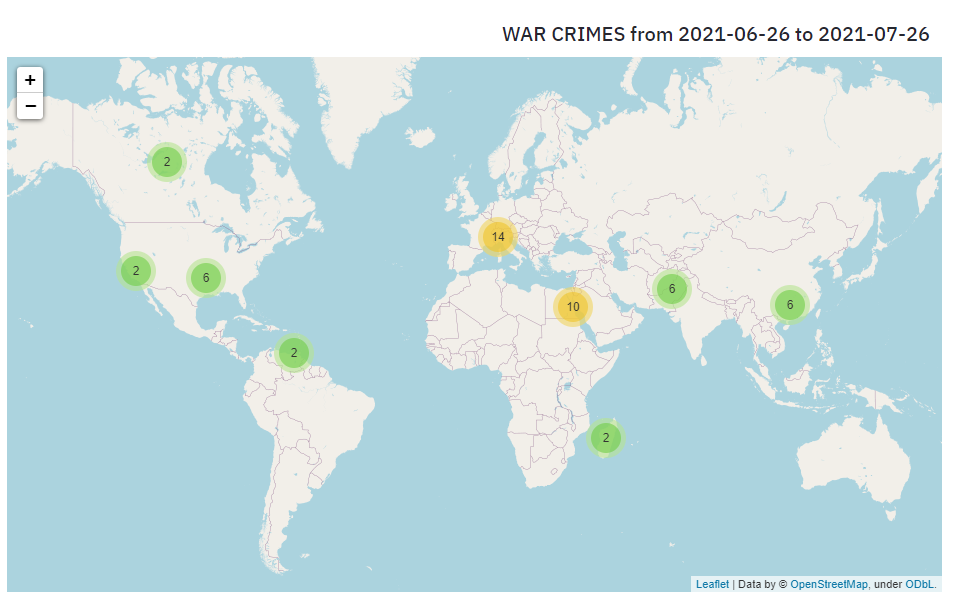 In conclusion, the envisioned goals for this project were successfully achieved, with labeled datasets generated for war crime data and an MVP with backend models and front-end interfaces deployed to Cloud AWS, displaying the visualization using Streamlit dashboard. This work could be further extended and furnished on possible areas of future exploration, including:

Finally, we acknowledge all the collaborators for their hard work, our client Human Right First for their close cooperation and feedback, and Omdena for making this project possible!