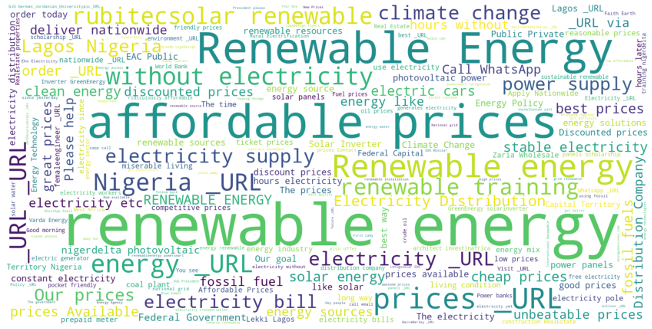 Using NLP clustering to better understand the thoughts, concerns, and sentiments of citizens in the USA, UK, Nigeria, and India about energy transition and decarbonization of their economies. The following article shares observatory results on how citizens of the world perceive their role within the energy transition. This includes associated social risks, opportunities, and costs.

The findings are part of a two-month Omdena AI project with the World Energy Council (WEC). None of the findings are conclusive but observative taking into account the complexity of the analysis scope.

The aim was to find information that can help governments to effectively involve people in the accelerating energy transition. The problem was quite complicated and there was no data provided to us. Therefore, we were supposed to create our own data-set, analyze it, and provide WEC with insights. We started with a long list of open questions such as:

In order to meet the deadline for the project, we decided to go with the English language only and come up with good working models.

Getting data from Social Media

The results discussed in this article obtained from scraped tweet data and for USA, UK, India, and Nigeria which cover the three categories of developed, developing, and under-developed countries.

We first gathered data by scraping tweets using several specific keywords we found to be important for specific countries using google trends. I added stop-words, stemming, removed hashtags, punctuation, numbers, mentions, and replaced URLs with _URL. I used TF-IDF vectorization for feature extraction of the articles. I am going to walk you through various steps taken to tackle the problem.

Sentiment analysis of short tweets data comes with its own challenges and some of the important challenges we were facing for this project were:

Considering all the challenges discussed, the sentiment analysis of the tweets did not produce satisfactory results (Table1) and we decided to test other models.

Topic modeling is an NLP technique that provides a way to compare the strength of different topics and tells us which topic is much more informative as compared to others. Topic models are unsupervised models with no need for data labeling. Because tweets are short it was really hard to differentiate between different topics and also correspond them to a specific topic using models such as LDA. Topic models tend to produce the best results when applied to texts that are not too short and those that have a consistent structure.

We chose a semi-supervised topic modeling approach (CorEX) [2]. Since the data was very high dimensional, we applied dimensionality reduction in order to remove noise and interpret the data. Permutation Test is used to determine the optimum number of principal components required for PCA [3,4]. From the explained variance ratio plot, it appeared that the cumulative explained variance line is not perfectly linear, but it is very close to a straight line.

This means each of the principal components contributes to the variance explanation almost equally, and there’s not much point in reducing the dimensions based on PCA.

The CorEx results showed that there are about 20 important topics and it was also showing the important words per topic. But how to interpret the results?

Data was very high dimensional and dimensionality reduction was not helpful at all. For example, if price, electricity, ticket, fuel, gas, and skepticism are the most important words for one topic how to understand the concerns of the people of that country? Is it fuel price that is of concern to them? Or electricity prices, or ticket prices? There could be a combination of many different possibly related words in each topic and by just looking at the important words in each topic, it would not be possible to find out what is the story behind data to harness clean energy for a better future.

Besides, bigrams or trigrams with topic models did not help much either because not the main keywords conveying the main focus of the tweet might always appear together.

Both Kmeans and Hierarchical clustering models lead to comparable results illustrating separate clear clusters. Because both models have comparable performance, we derived all results using Hierarchical clustering which better shows the hierarchy of the clusters. Tweet data were collected for four different countries as discussed before and the model was applied to the data of each country separately to analyze the results. To summarize we only show the clustering results for India. But all the insights across countries are shown at the end of the article.

After finding clear clusters from the data, the next step was interpreting the data by creating meaningful visualizations and insights. A combination of Scattertext, co-occurrence graph, dispersion plot, colocated word clouds, and top trigrams resulted in very useful insights from data to harness clean energy for a better future.

An important lesson to point out here is to always rely on a combination of various plots for your interpretations instead of only one. Each type of plot helps us visualize one aspect of data and combining various plots together helps to create a comprehensive clear picture from data.

Two types of plots were created which was very helpful in interpreting the results.

1) Visualizing word embedding projections. This has been explored using word association with a specific keyword. The keywords include the following: [Access, Availability, Affordability, Bills, Prices]. If the reader is interested, they can try more keywords using the provided code in this study.

2) In another plot, the uni-grams from the clustered tweets are selected and plotted using their dense-ranked category-specific frequencies. We used this difference in dense ranks as the scoring function.

All the interactive plots are stored in an HTML file and are available in the GitHub repository. If you click on the interactive version, the list of tweets with each specific term can be explored. Please note that first hierarchical clustering is applied to the data and then the clustered tweets are given to Scattertext as input. You can gain further information by diving deep into these plots. The data used for creating these results can be found here and the notebook to apply to cluster and create these scatter plots can be found here.

The following shows the interactive versions of all plots for various countries:

A word’s importance can be weighed by its dispersion in a corpus. Lexical dispersion is a measure of a word’s homogeneity across the parts of a corpus. The following plot notes how many times a word occurs throughout the entire corpus for different countries including India, Nigeria, UK, and the USA.

According to the following dispersion plot, access to electricity is an important concern for Nigeria while this is not the case for the other three countries. How do we know that this access is related to electricity? Well, the answer is Scattertext plots shown in the previous section. Analyzing those plots together with the dispersion plot shows that the concern is electricity access.

Energy, electricity, power, and renewables are also the topic of most of the discussions in all of these countries. But what aspects of each topic are of concern to each country? The answer is given in the previous section where we interpret the results of Scattertext plots.

The following plots display the networks of co-occurring words in tweets in different countries. Here, we visualize the network of top 25 occurring bigrams. The connection between the words confirms the insight derived in the previous section for all cases.